Being a keen birdwatcher, wildlife enthusiast and enjoying photography is a great blend for me, and regularly gets me into the great outdoors, away from the hustle and bustle of my regular job. Being in a birding group gives me an opportunity to extend my birding knowledge, and visit new areas, but improving my camera abilities is largely hit and miss. Every now and then I take the opportunity to go on a day-course workshop with a wildlife photographer, sometimes alone, and sometimes, as yesterday, with a like-minded friend.

Our venue was the NE coast, Bempton Cliffs RSPB - one of my favourite Seabird colonies, and Filey Brigg - a designated Site of Special Scientific Interest (SSSI or triple SI), most of which is a country park a mile north of Filey, extending into the North Sea from Carr Naze along a peninsula of Limestone and Sandstone, with 15m cliffs and sea-swept rocky coastline - ideal habitat for waders as the tide turns.

Due to the tides, we headed into Filey, and out on to the Brigg first (getting cut off here is a real hazard for the unwary!) and were rewarded with a slowly receding tide and incoming waders making the most of invertebrates exposed as the water dropped. Initially the weather was calm with good light, and Steve Race of Yorkshire Coast Nature, our workshop leader, helped us with camera settings to make the most of the habitat and conditions. There is a local Filey Brigg Ornithology Group with a manned hide on the Brigg, for anyone who would like more information on the seasonal birds and wildlife. 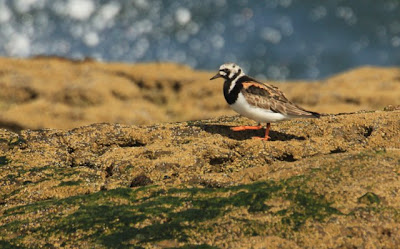 There were several Turnstone (Arenaria interpres), already moulting out their resplendent summer plumage, but still strikingly colourful as they scavenged amongst the seaweed covered rock. 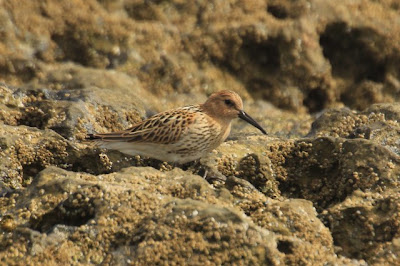 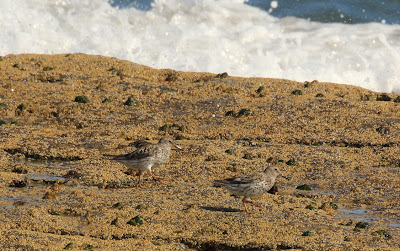 A few Dunlin (Calidris alpina) and Purple Sandpiper (Calidris maritima) were also spotted. These three species were ideally placed, we had the sun high to our right, making for idea subject lighting.

More of a challenge were a small colony of Grey Seals - Halichoerus grypus meaning "hooked-nosed sea pig"- Not a very fetching name for our largest carnivore, or one of our cutest! 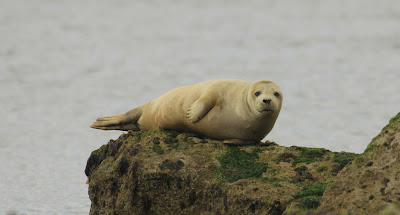 Their curiosity, almost human faces and pure laid-back indifference make them a great subject to take images of. This group of 10 or so, from a UK population of around 120,000, were unfazed by the small group of people taking pictures of them from as close as 10' - although there was always a channel or inlet between us and them. 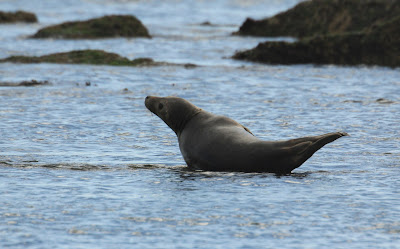 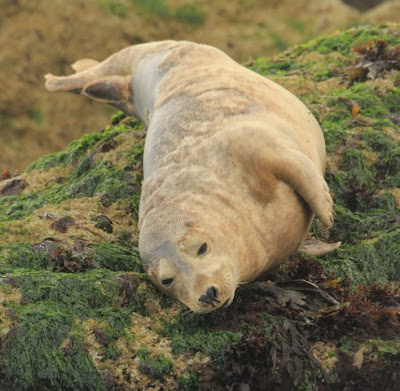 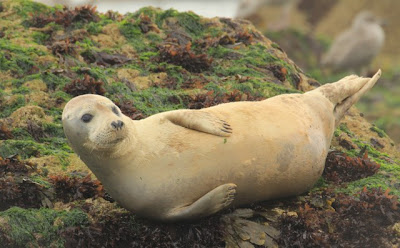 The Greys are the most numerous of the UK seals, and feed on a wide variety of prey – fish, shellfish, squid and octopus. They are opportunistic feeders, and will eat whatever is available, including cod, herring, flounder, salmon, mackerel, sandeel, shrimp and whelk. Their fishy diet often brings them into conflict with fishermen and drowning in fishing nets is occasionally an unfortunate consequence of this. Grey seals were the first mammals to be protected by modern legislation with the Grey Seals Protection Act of 1914.

Following lunch at an excellent local cafe & tearoom, where Steve also has a photography exhibition, we headed out to Bempton. Our Birding group had ventured over to Bempton in June, and the change was astonishing. The Razorbills and Guillemot had gone as had, we were assured, the Puffins - the one bird we had hoped to be able to get shots of with their young.

The Gannets were still here in good numbers, although nowhere near the vast flocks which had been around less than 8 weeks previously - definitely a huge benefit for the nostrils, if nothing else! 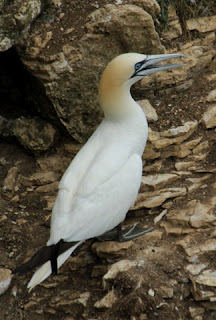 Here and there along the cliffs a pair of Gannets were still tending a huge, and very fluffy youngster and as we watched we were advised on how to sex adult Gannets, the feet of the male have a turquoise/greeny blue line along back of each toe, whereas those of the female are a more yellowy-green. 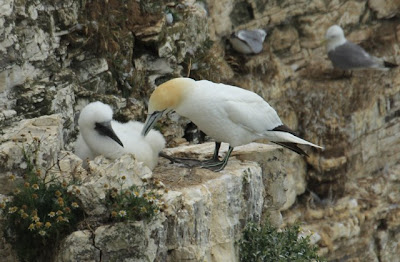 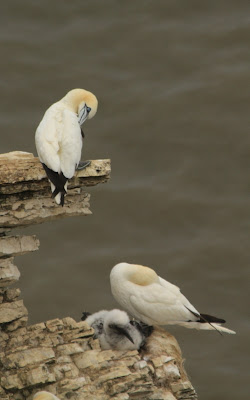 Also still around were one of the prettiest of the 'gulls', the RSPB page describes them as 'Gentle looking', they are the Kittiwakes (Rissa tridactyla). Around 8% of the world population live in UK waters, although they are in serious decline, which has been attributed to a shortage of their food supply of sand eels, krill and small surface feeding fish. 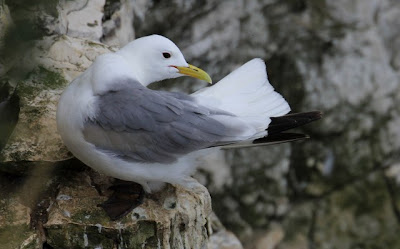 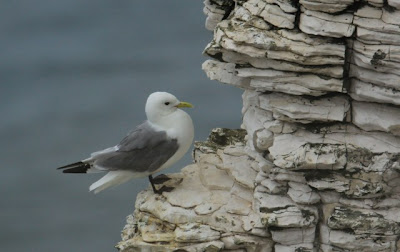 In view of their struggling numbers, it was good to see several young Kittiwake on the cliffs. These young Kittiwakes were much further advanced than the straggling Gannet chicks, and could be regularly seen taking off and doing ever increasing circular tours of the cliffs. Getting good shots of airborne birds is a skill I have still to work at, but I took the opportunity here, and was reasonably happy with the results. After choosing one of the 9 Canon focal points, the trick is to try and get it, and hold it, on the eye of an unpredictably moving target.. 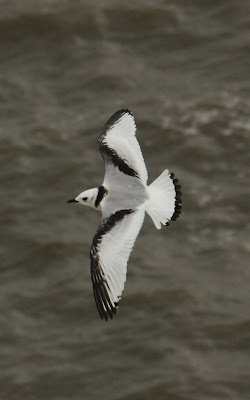 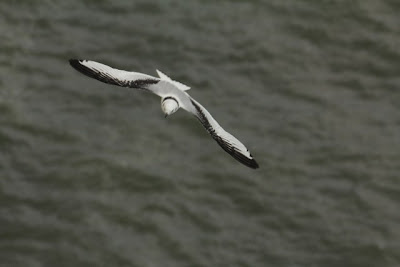 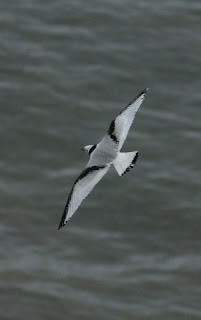 Young Kittiwakes have very distinctive markings, with a black fore-edge to their wings, and a similar black edge to their tail feathers, and a shirt-collar across the back of their necks.

An area I have struggled with in the past has been holding detail and definition on white (or black) birds, where too much light burns out detail, and too little (on black) causes it to fill in and become just a white or black, blob. Again, taking advice from Steve, and tweaking the settings, I combined trying to get flight shots with holding detail, and was happy with this shot of an airborne adult Gannet. 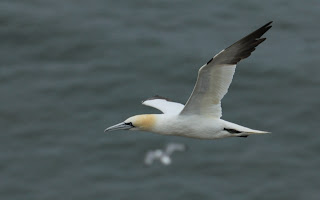 Despite being assured by our Guide and mentor-for-the-day that the Puffins "Had all left", we found one solitary bird, perched just below one of the viewing areas. 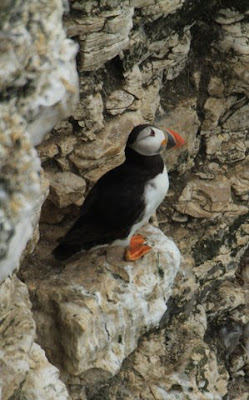 After allowing us ample time to take several shots, this single individual too headed out to sea for the winter. It brought home to me just how little time these tiny (26-29cm) birds spend on the cliffs, back in June we had been assured that, due to the lateness of the season and appalling weather conditions, very few of these colourful little characters had arrived. In the intervening 8-9 weeks, they had arrived, nested, mated, laid eggs, reared their young to fledging, and headed out to sea once again.

We had gradually become aware that the temperature had dropped and time was rolling on so, we too headed off, back to our cars for our return journeys.

I'd like to thank Steve Race for a very enjoyable, entertaining and informative day out. Much was learned, and hopefully remembered. I look forwards to joining another of his workshops in the not too distant future.