The end of June should be a time of blazing sunshine, fledglings & wildflowers, so a trip to the RSPB reserve at Leighton Moss in the Lake District was full of promise. But as we know, Spring is running late this year!

The bird count started as soon as I parked up with Collared Dove and a very cheeky Robin putting the first appearances. The new ‘touch garden’ to the rear of the reception building is a very pleasant addition to this reserve, being an ideal meeting and eating area.
En route to the first hide and the first of the fledglings was seen - a brown speckled Robin being escorted by one of its parents. It was along this section that a Chiff-chaff was also heard calling. All the hides at LM seem to have been replaced or refurbished since my last visit, and at Lillians Hide there was a live-feed link from a Marsh Harrier nest somewhere out in the vast reed-beds, close-ups of a chick being fed providing a good talking point amongst the gathered birdwatchers.

Seeing several adults patrolling the reeds from various vantage points during the course of the day was a real treat. The noisome Black-headed Gulls were extremely vocal during throughout the trip and they seemed to have young in all stages of development, from fluffy chicks to fully fledged juveniles. 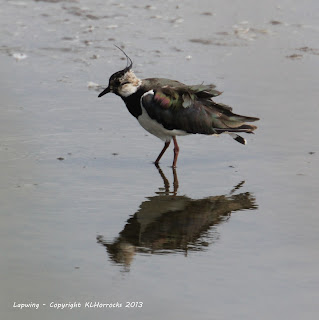 From Tim Jackson Hide we saw Grey Heron, Little Egret, Black-tailed Godwit, Lapwing, & Greylag Goose before being treated to excellent views of one of the reserves female Red Deer gracefully waded across the shallow water between the standing reeds.

Walking along the causeway out to Griesdale Hide a Reed Warbler was heard singing clearly and after several minutes it ventured high enough up the 6’+ growth of reeds to give good views. 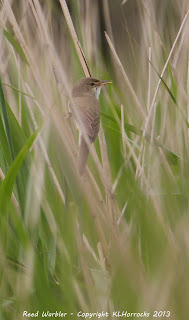 Once in the hide an adult Moorhen was escorting 2 tiny black fluffy chicks across the mud-flat area directly in front of the windows whilst an adult Coot with a huge single ‘chick’ emphasised just how mixed up the seasons have been this year. From here two Mute Swans also gave good views, whilst further out a Reed Bunting was picked out in the distance, as were Tufted Duck, Shoveler, Teal, and Gadwall already in eclipse plumage. Small numbers of Swift were also seen. It was from here that emotions became mixed as one of the Marsh Harriers was clearly seen making a distant kill, and carrying it’s (unidentified) prey off to an awaiting family. Walking back through the wooded area we had good views of Tree-creeper and both Great & Blue Tit feeding their respective fledglings.

Lunch-break was taken near the feeding station back at the Scented /touch garden and we were plagued by Mallard whilst watching Great Tit, Blue Tit, Coal Tit, Willow Tit, Bullfinch, Greenfinch, Nuthatch, Chaffinch & a Lesser-Spotted Woodpecker all availed themselves of an ample supply of free food.

After lunch, the sun finally broke through as we headed out towards Jenny Brown’s Point and whilst walking, were buzzed by good number of Swallows as the adults strove to feed their fledglings perched on the barbed wire fences.

A Buzzard was spotted circling above the distant wooded hillside & Shelduck could be seen out towards the incoming tide-line. Carrion Crow were spotted in the fields amongst the grazing sheep and Lapwing were again seen here although in lower numbers. Oystercatcher were first heard and eventually spotted with their distinctive plumage. A Pheasant was also heard calling from the woods and a Skylark was heard as we walked back to the car park where another Greenfinch was seen singing. As we walked out towards Allen Hide, large numbers of nest boxes were spotted to the far side of the fields, hopefully they will serve to attract Tree Sparrows in the not too distant future, sadly there was no sign of activity in them this year. It was along this section that Red-backed Shrike had been reported only 2 days previously, but our only find was a young Whitethroat, perched high on an Elder twig. Allen Hide proved disappointing with a small colony of Black-Headed Gulls having taken up noisy residence, a single Redshank and a sleeping Oystercatcher being the extent of our spots.

Onwards to Eric Morecambe Hide, and the incoming tide seemed to have pushed a few more waders inland.

Good numbers of Redshank, Lapwing and Black-tailed Godwit and Pied Wagtail all gave excellent views before we again headed for the cars. As we walked back along the path a scattered group of fledgling Sedge Warblers were spotted less than 3’ from the path and afforded several excellent photo opportunities – for me this was the highlight of the day. 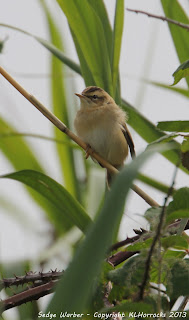 Leaving the young to be fed, a Wren was briefly spotted in a small wooded corner before a Goldfinch was seen high on a bough and a Curlew flew overhead calling loudly. Heading off towards the Public Hide, I spotted a fearsome-looking Diving Beetle nymph (Dytiscus Marginalis) on the path, probably dropped by one of the avian inhabitants. Once at the hide we saw only more BH Gulls before venturing to the furthest vantage point on the reed-beds at Lower Hide. Along the path we commented on the high numbers of yellow Flag Iris, wild Orchids, Ragged Robin and Angelica. Once at the hide we found Cormorant and had more good views of Sedge Warbler before one of the resident Marsh Harriers came over. A Sand Martin was also seen amidst a large number of hunting Swifts but no one else managed to pick it out. Heading back to the cars before departing, a young Magpie gave good views as it sat in a path-side tree. 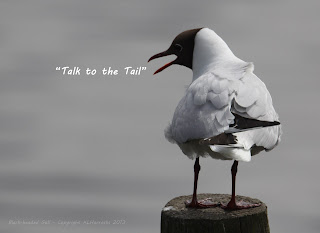